The term shutter comes from still photography, where it describes a mechanical "door" between the camera lens and the film. When a photo is taken, the door opens for an instant and the film is exposed to the incoming light. The speed at which the shutter opens and closes can be varied — the faster the speed, the shorter the period of time the shutter is open, and the less light falls on the film.

Video camera shutters work quite differently from still film camera shutters but the result is basically the same. (The technical difference is that, rather than using a mechanical device, the shutter speed is adjusted by electronically varying the amount of time the CCD is allowed to build a charge. If this means nothing to you, don't worry. It really doesn't matter how the shutter works, it's the effect it has that counts.)

The shutter "opens" and "closes" once for each frame of video; that is, 25 times per second for PAL and 30 times per second for NTSC. Thus, if a camera has its shutter set to 1/60, each frame will be exposed for 1/60 second. If the speed is increased to 1/120, each frame will be exposed for 1/120 of a second. Remember, the shutter speed does not affect the frame rate, which is completely separate and in most cases always stays the same (see shutter speed vs frame rate).

One side-effect of higher shutter speeds is that movement appears more jerky. This is because motion blur tends to smooth consecutive frames together.

The three shots below were each taken as the car travelled past a stationary camera at 100 km/hr. With the shutter off, motion blur is most pronounced. As the shutter speed is increased, the image becomes sharper. 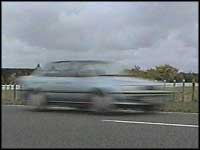 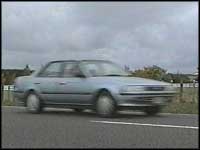 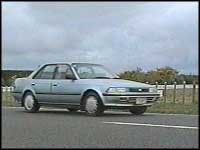 Higher shutter speeds are common in sports coverage. Watch any fast-action sport to see the "flickering" shutter effect. Notice how the slow-motion replays look, especially when they freeze the last frame.

Note: As a result of the reduced exposure time with high shutter speeds, the image may appear darker unless the iris is opened to compensate.