The two most common zoom mechanisms are shown below: 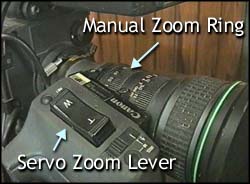 There's an important characteristic of zoom lenses that you should be aware of: The further you zoom in, the more difficult it is to keep the picture steady. At very long zooms, a tripod is essential. If you're having trouble keeping your shot steady, it may be possible to move yourself closer to the subject and then zoom out. This way you'll have essentially the same framing, but much steadier.

Zooming is the function everyone loves. It's easy and you can do lots with it, which is why it's so over-used. The most common advice we give on using the zoom is use it less. It's a great tool in moderation, but when most of your shots are zooming in and out, your audience will feel nauseous.

As a rule, don't zoom unless there is a reason to. If you want to show both the whole scene as well as some close-up details, you don't need to have a zoom in. Instead, shoot a wide shot, stop recording, zoom in to a close up, then start recording again. The result is one shot which cuts cleanly and quickly to another, portraying the same information as a zoom, but more efficiently.