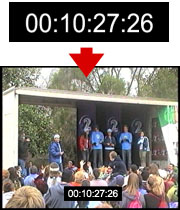 A time code is a series of numbers generated in a controlled sequence by a timing system. In video and other recorded media, timecode can be added to a recording in order to facilitate logging, synchronization, file organizing and searching, etc.

Timecode can be overlaid on a video image as pictured right, or it can be hidden as data only. In either case every single frame of the video is marked with a unique timecode number.

Note: You can download pre-made timecode clips to add to your videos here.

The first three numbers are the same as normal clock time so they have maximum values of 23, 59 and 59 respectively. The last number counts the number of video frames since the previous whole second, so it's maximum value depends on the frame rate of the video system. In a system that uses 30 frames per second (fps), the maximum range is therefore 00:00:00:00 to 23:59:59:29.

The most common frame rates for video timecode are:

Most timecode counts the elapsed time from the beginning of a tape, recording session or individual clip. A variation is known as "Time of day" timecode, which means just that — it records the actual time the recording was made rather than elapsed time of the footage. This is handy in many situations. For example, you might want to synchronise footage from multiple cameras that stopped and started recording at different times.

Film uses 24fps, and more recently, 48fps and even higher. Timecode in theatrical films is different and very simple — it counts every frame from number 1 to the total number of frames in the movie.