Home : Video : Misc : How to Get More Battery Life

Looking After Your Batteries

The most important thing you can do to increase battery life is to treat your batteries properly.

There are many different types of batteries, and different types require different treatments. Find out what kind of batteries you have, and how they should be cared for.
For example, Nickel-Cadmium (Ni-Cad) batteries should not be recharged until they are completely drained of power. This means that if you use half the battery's charge during a shoot, don't recharge it. Instead, either leave the battery until your next shoot and continue using it then, or leave your camera running until the battery is drained. Then you should recharge the battery without interruption until it regains a full charge. Failing to treat Ni-Cads this way results in reduced power capacity.

On the other hand, lead-acid batteries should be recharged after every use, even if only a small amount of their charge has been used.

When using devices which require more than one battery, don't mix-and match batteries of different charges. One bad battery can place too much load on the good ones, and shorten their life.

Bear in mind that rechargeable batteries will not stay fully-charged sitting on the shelf. They begin to lose their charge after a few days, and will lose about 5% of their charge every day thereafter. This is why batteries are shipped uncharged.

Here are some power-saving tips for camera operations: 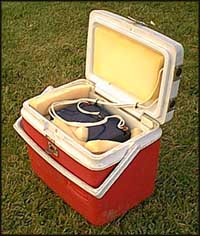 This picture shows a 12V motorcycle battery housed in a "chilli-bin". The battery is connected to two XLR-4 sockets on the lid, allowing for easy connection.

This unit is cheap, versatile, robust, waterproof, and insulated against temperature changes. It will power a typical television camera for at least half a day, and recharge in about an hour.