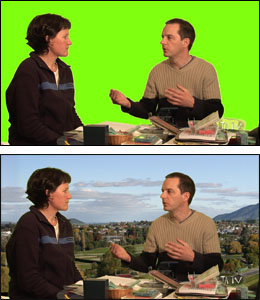 A chroma key is a technique used in film, video and still photography to replace a portion of an image with a new image. This is most commonly used to replaced a coloured background with a different setting.

The example on the right shows a shot taken against a green-screen background. The shot is then processed using editing software. The editor tells the software which colour to make transparent, sets a few parameters and defines a new background image.

Chroma keys can be done in post-production or in real-time. Television programs such as news and entertainment shows use them a lot.

Note that anything in the shot which falls within the specified colour range will be made transparent, so if a person wears a green shirt they may become semi-invisible!

The most common colours used in chroma keys are blue and green, because these colours are least likely to affect the foreground shot. Bluescreen and greenscreen sets are very common in film and television studios.

See also: How to Make a Green-Screen