Once your edit system is set up correctly, you need to record (capture) the footage from the source machine (e.g. camera or VCR) onto the computer's hard drive. The capture process goes like this: 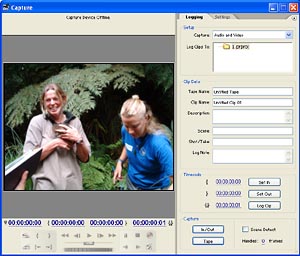 Turn everything on and launch the video capture software. Exactly how this works will depend on your software, but in most cases you will have a menu option to open a capture window.

For example, in Adobe Premiere Pro, select File > Capture (F5) to open a window like the one pictured here.

Press "play" on the source machine. If luck is on your side the capture window will show the picture coming from the source. If not, consult your software help file to see what you need to do.

Look for a record or capture button in the capture window. Simply click this button to record (just as you would press the record button on a VCR). Keep recording until you have all the footage you want. In most cases you will want to capture only the footage you are likely to need, but it is better to capture more footage than less — you can discard unwanted clips later.

When you have captured all the footage, save the video file(s) to your hard drive.