The focus pull (AKA rack focus) is a creative camera technique in which you change focus during a shot. Usually this means adjusting the focus from one subject to another.

The shot below begins focused on the plant in the foreground, then adjusts focus until the girl is sharp. 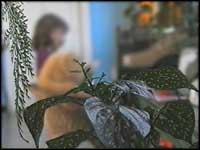 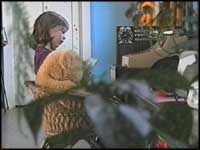 The focus pull is useful for directing the viewer's attention. For example, if there are two people in shot but only one is in focus, that person is the subject of attention. If the focus changes to the other person, they become the subject. This is often used in drama dialogues — the focus shifts backwards and forwards between the people speaking. A slightly more subtle trick is to focus on a person speaking then pull focus to another person's silent reaction.

Throwing focus usually means dropping focus completely. This can either refer to certain parts of the picture (e.g. the background) or to the entire picture.

Throwing focus on part of a picture can't normally be done during a shot — it requires making adjustments such as changing filter or adding shutter.

Throwing focus on the whole picture can be done at any time simply by turning the focus ring until focus is completely lost. This can be used as an opening/closing shot or as a transition between shots. It can also be used for various effects, such as a point of view shot from someone who is drunk or groggy.

In this age of digital editing, focus-throwing for effect is more commonly achieved in post-production. This adheres to the general guideline that it's safer to record pictures "dry" (without effects) and add effects later.