This is the most important step, and perhaps the most difficult to master. It should be where most of your your energy is directed.

Camera work is only one skill in a larger process — the goal of which is usually to produce a completed video, TV program, or presentation of some kind. To be good at camera work, you must have a clear picture of the whole process, and some idea of what the finished product should look & sound like.

If there's one thing that separates the amateurs from the pros, it's that amateurs "point and shoot", whereas pros "plan and shoot". Obviously there are times when you don't have time to prepare before having to record — sometimes the action begins unexpectedly, and you just have to go for it. In these cases, as far as possible, you plan as you go. It can't be stressed enough — planning is everything.

For general camera work, you can divide your plan into two parts: The "Shoot Plan" and the "Shot Plan".

In this case, the word shoot refers to a shooting session. If you think of everything you record as being part of a shoot, and have a plan for every shoot, then you're well on the way to having better organised footage.

First of all, be clear about the purpose of every shoot. Generally speaking, everything you do should be working towards a larger plan. Exactly what this is will depend on many factors.

Planning means adopting an attitude in which you take control. When you get out your video camera, instead of thinking "This will look good on video" and starting to shoot whatever happens, think "What do I want this to look like on video?". You then shoot (and if necessary, direct) the action to achieve your goal.

Plan the approximate length of the shoot: How much footage do you need to end up with, and how long will it take you to get it?

Have a checklist of equipment, which could include: camera; tripod; tapes; batteries/power supply; microphones and audio equipment; lights and stands; pens, log sheets and other paper work.

This is critical. If you think that this doesn't applies to you, then you're wrong. Everything you capture must be shot with editing in mind. There are two basic ways to edit: Post-production and in-camera.

Note: There is one other situation which should be mentioned: the live multi-camera shoot. This is where a number of cameras are linked to a central vision mixer, and a director cuts between cameras (for example, a live sports presentation). In this case, you can think of the editing as being done in real time as the shoot happens.

Whichever method of editing you use, there are fundamental rules to follow. Since understanding these rules requires some knowledge of shot types and framing, we'll leave them for now and come back to them later. 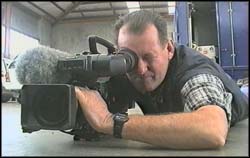 Once you have a plan for your shooting session, you're ready to begin planning individual shots.

First of all, have a reason for every shot. Ask yourself: "What am I trying to achieve with this shot? Is this shot even necessary? Have I already got a shot that's essentially the same as this one? Is my audience going to care about this subject?"

Once you're happy that you have a good reason to get the shot, think about the best way to get it. Consider different angles, framing, etc. The art of good composition takes time to master but with practice you will get there.

Ask yourself exactly what information you wish to convey to your audience through this shot, and make sure you capture it in a way that they will understand.

Take the time to get each shot right, especially if it's an important one. If necessary (and if you're editing in post), get a few different versions of the shot so you can choose the best one later.

Also, for post editing, leave at least 5 seconds of pictures at the beginning and end of each shot. This is required by editing equipment, and also acts as a safety buffer.

Finally, one more piece of advice: Before planning or shooting anything, imagine watching it completed.