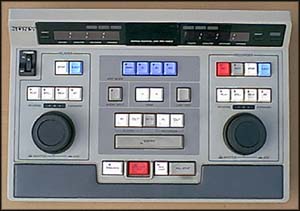 If you are lucky you will have access to an edit controller. This is a device which connects to and controls the source and record machines.

The Sony edit controller pictured here is a fairly typical example. The controls on the left (above and including the jog/shuttle ring) control the source machine. The corresponding controls on the right are for the record machine (notice the addition of a red record button).

The controls in the middle are for various edit options such as marking in/out points, etc.

Some smaller edit controllers only feature one set of controls, plus a switch to select either the source or record machine. This way you can still control both machines but only one at a time.

Edit controllers usually allow you to program your edits more precisely, preview the edit before recording it, and perform other useful tasks. In some cases an on-screen menu is generated to help you program multiple edits.