Home : Video : Editing : Linear : Setting Up
This is a legacy page (outdated but still applicable to some situations, and may be of historical interest). More info about legacy pages
Introduction | Setting Up | Edit Controllers | Assemble Editing | Insert Editing | Audio Insert | Titles & Extras | Summary

How to Set up a Tape-to-Tape Editing System

The diagram on the right above shows a simple linear (tape to tape) editing system. It consists of two VCRs, two video monitors (or televisions) and connecting leads. The basic process is to play the original tape in the source machine and record a new (edited) version on the record machine.

Begin by choosing which of your VCRs will be your source and which will be the record. In most cases it won't matter which is used for each purpose, but if one machine is strong in one area it might make a difference. For example, if one machine has better recording features it will be the obvious choice for the record machine. If you don't know which to use, assign them at random. 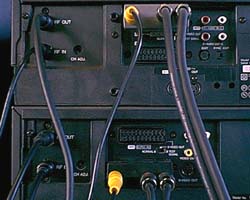 There are a number of common analogue connection types, the most common being RCA, RF (AKA aerial or Belling-Lee), S-Video and SCART. S-Video is probably the best choice for video and RCA for audio. RF is the lowest quality and has other complications — avoid it if you can.

Digital video machines may also have connectors such as Firewire or USB, which are the best quality of all.

Once the tape machines are connected, connect each machine to its own monitor. Exactly how you do this will depend on your VCRs.

Once everything is connected, test the system.

If something isn't working, chances are you have either made the wrong connections or selected the wrong input(s). There are only a limited number of combinations — if all else fails employ trial and error.

If your testing is successful, you are ready to begin editing.